Home
BLOG
Who Is Russel Brunson & Can He Really Help You Make $3000/Month?
Your friend might want to know about this:

Are you curious to find out who is Russel Brunson and how he managed to become one of the current leading entrepreneurs and co-founder of the most talked-about sales funnel building platform out there?

This piece of article will give you an insider grasp of the life and act of Russel Brunson. I’ll talk about his humble beginnings and the challenges he had to face to get to where he is today.

But before I do all of that, I want to familiarize you with his sensational and game-changing funnel builder that has undoubtedly changed the way people look at acquiring leads and customers for their businesses.

I don’t know if you’ve heard, but his funnel building software is by far one of the best marketing instruments available on the market today and has helped thousands of business owners and solo-entrepreneurs to better market, deliver, and sell their products and services online.

The beauty of the platform lies in its simplicity and the usefulness it brings to the people that decide to use it. I’m not sure if you know, but the funnel building practice was quite expensive and unprofitable for most of us back in the day.

Speaking from experience, the entire process was tedious, and it required me to invest a ton of money so that I could hire a funnel expert to get a single sales funnel up and running. It was frustrating, and it harmed my beauty sleep.

On top of that, I didn’t have the opportunity to learn from such helpful resources like Funnel Scripts, One Funnel Away Challenge, nor the 30 Days Summit, which made it extremely difficult for me to figure out what went where and how to set everything up.

WHO IS RUSSEL BRUNSON?

Russel Brunson is the real deal and a proper representation of what an entrepreneur should be. He’s smart, skilled, genuine, and has the willpower and focus on growing. Oh, and most importantly, he gets the job done.

The mark that he’s left on the internet marketing community is yet to be felt, and his ability to be transparent and shine in a room filled with seasoned entrepreneurs is something out of this world.

Just go and watch his Funnel Hacks webinar, and I guarantee you’ll be bursting of excitement by the time it’s over. He shares a new secrets funnel strategy that has helped businesses to grow from startups to 2 Comma Club winners, so I’m pretty sure you’ll have something new to learn.

The thing I like the most about Russel is that he focuses on adding value first. He’s not like most entrepreneurs out there that will do anything to attain your e-mail address so they can bombard you with thousand-dollar courses that don’t even provide you with a genuine way to make money online.

Adding value is something that will always be appreciated in the online marketing world. And that’s what he’s been doing for the past fifteen years – perfecting his craft by helping thousands of businesses worldwide to innovate and thrive.

I even encourage you to listen to his Marketing Secrets podcast or watch his Funnel Hackers TV where he talks about various marketing and funnel related topics. The content that you’ll find inside is pure gold and he’s giving it all for free. 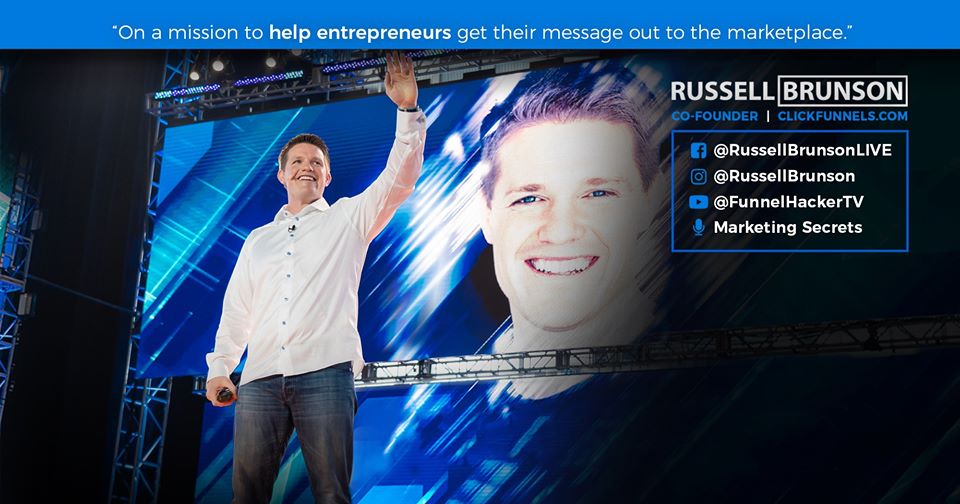 He’s been helping entrepreneurs shine and has taught many ordinary folks how to make more money online through some of his well-known bestselling books like DotCom Secrets, Expert Secrets, and Traffic Secrets. (Such a secretive guy ha-ha).

He’s published and sold over half a million copies, and by the looks of it, he’s not planning to stop anytime soon. I don’t know about you, but half a million sold copies seem like a lot to me. One thing is for sure – you can’t argue with success.

Oh, and I nearly forgot to mention that he’s giving away all of his books for free. You can get ahold of them without paying a single cent for the books, but you’ll need to cover the shipping and handling costs. It seems like a fair deal if you ask me.

I genuinely think that Russel is a unique individual and that you can learn a ton of new stuff from him. He’s seen it all, and his ability to sell almost anything is something you don’t come across every other day.

To prove I’m not talking gibberish, I ask you to go ahead and search “Russel’s Potato Gun Story” on Google. You should find several articles and videos on how he started his entire business as a potato gun expert. He sold DVD’S on how to create and use a potato gun, which blew my mind, to be honest.

Who Was Russel Brunson Before ClickFunnels?

His passion for marketing and delivering results was present ever since he was a little kid. He would sit in front of his TV and listen to the radio so that he could hear and see the commercials that were being broadcasted.

Those adverts that Russel saw at a young age would provide him with countless hours of entertainment, as well as new ideas and motivation for upcoming challenges.

My dad always told me that I should look out for people that were passionate about something from a young age. This is the exact thought that came to my mind when I first heard about Russel’s early days.

Where Was Russel Brunson Born?

Russel Brunson was born in Provo, Utah, and spent most of his childhood living there. But why are we even talking about his beginnings?

Because that’s what fueled his passion for perfecting his funnel building skills, it’s fair to say that his beginnings were rough but well worth it at the end.

His SaaS business finally took off and started to generate mad profits after many years of failure. But one thing is for sure, he struggled through thick and thin and nothing was given to him, which clearly indicates his winner mentality.

But where can you find him today?

Probably in his office over at Clickfunnels. He spends most of his time working on his business, and it’s no wonder that he was able to grow it into a multi-million dollar business that has over 100,000 members, of which forty percent are active users.

Just to let you know, the basic subscription plan starts at $98 per month. That being said, I’m not surprised that he’s been able to amass such a fortune.

Since Russel doesn’t have an official Wikipedia page, we’ll pretend that this is the one. We’ll briefly discuss some less known facts about him, including his net worth, current wife, age, and wrestling career.

How tall is Russel Brunson And What’s His Age?

I know this might seem like a silly question, but surprisingly it gets asked a lot. In all fairness, I find it reasonable since most people are curious and stalkers by nature (just kidding, or am I?).

He’s an American citizen aged 40 (born March 8th, 1980) and he’s one-meter and eighty-eight centimeters tall (1m 88cm) and weight somewhere around 97- 99 kilograms, at the time of writing of course. Other physical measurements have not been provided yet.

Where Does Russel Brunson Live?

He currently resides in Boise, Idaho, and is happily married to his wife, Collete Brunson. They met with one another over at Boise University and have a beautiful family with five children.

This is another fun fact about him. He was a wrestler way before he became an online mogul and entrepreneur. There was one thing he did better at that time, and it was wrestling.

His competitiveness and toughness are owed to his time spent on the wrestling mat. Those two characteristics are what made it possible for him to travel the world and share his thoughts with likeminded people.

Not many people deserve a long-ass post like this one, but Russel is one of them. He has helped me grow as a marketer, and this is my sign of appreciation to him. Thank you, Russel, and keep up the good work.

Russel managed to grow Clickfunnels into the company that it is today thanks to his team of trained affiliates. He specially created the Affiliate Bootcamp so he can teach them how to properly promote his software and bring him new fresh leads continuously without doing all the hard work himself.

Many Clickfunnels affiliates are earning way more than 3K per month, so what’s stopping you? Just to give you a heads up, it’s a legitimate program that requires you to put in some effort if you wish to see success with it and I strongly advise you to stay away from it if you think that it will make you an overnight millionaire success story.